There is no greater testimony to that quote than Braxton.  This child is so incredible! Sure, I’m his mom and I’m supposed to say that, but you can’t say you don’t agree! 😉  Braxton has gone through so much in his short life and yet he is always smiling and laughing and lighting up everyone’s life.  Through his recovery from the hand surgery, he’s had moments of frustration and sadness, but they pass quickly and he’s back to enjoying life.  He’s tried so hard to adapt to the situation as well.  Thankfully, his thumbs are out of the bandages so he’s becoming quite proficient at using them haha. He’ll reach out for his pacifier with his thumb and you can see satisfaction all over his face when he manages to get it and put it in his mouth without any help.  Sometimes, he’ll even just bend himself forward to try and pick up the pacifier with his mouth! I look over and Braxton has folded himself in half! He’s like that with everything though, he’s going to be a happy kid who can adapt well to any situation.  When he was learning to sit on his own, we’d sit him up and when he fell over instead of crying he just flipped himself to his tummy and started trying to pick up on all fours instead. It seems like he just thinks “Well, that didn’t work, let’s just try something else instead.” He’s not giving up, he’s finding other ways to entertain himself and strengthen and learn.  Adaptation is so far one of his strong points.

As far as the ear and sinus infections go, he’s definitely starting to feel better.  He sounds much less congested and hasn’t vomited anymore. He’s tolerating his feeds well and we’re slowly working on increasing the speed back to where he was before he got sick.  He’s been very vocal this weekend too.  We haven’t been able to use his hearing aids since he’s still having some ear discharge from the infection, but hopefully by tomorrow or Tuesday he should be ok to put them back in.  Nonetheless, he’s been babbling away and shrieking with excitement randomly throughout the day.  Watching him and sister play right now and he’s cracking up with her and actually responding to her silliness. It’s so great to see that. I can’t wait until he can really talk to her and hear her with no problems.  More importantly, I’m glad that she’s been so great with him. Proud mama for sure. 🙂

We have a busy week ahead. Braxton has his regular PT and Speech therapy appointments, OT is on hold until his hands are out of the bandages, we have a follow-up Wednesday for another bandage change, Thursday we follow-up with the audiologist for his hearing aids, and Friday we go for his Gastric Emptying Scan.  Busy, busy, busy, but Braxton will get through it all with a smile on his face. Resilience. 🙂 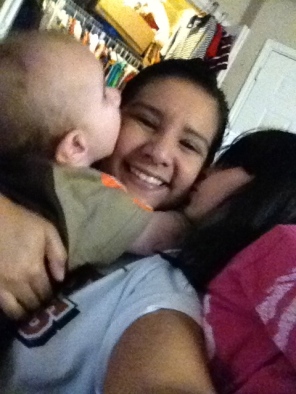 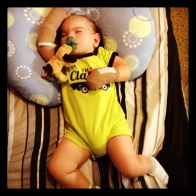 Exhausted after a long day

How is that even comfortable?! 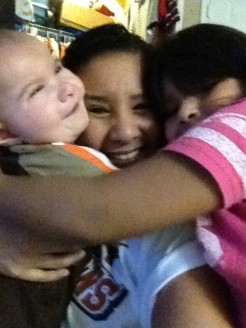 Love and smiles from the kids 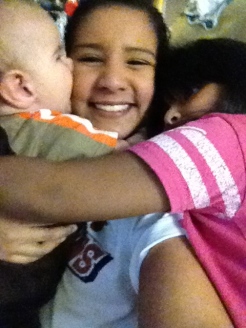