When My Daughter Asked, “Do You Hope This Baby is ‘Normal’?”

I have yet to share our exciting news on the blog, and if you’ve followed us on Facebook, you already know…Braxton is going to be a big brother!! We’re expecting a baby girl in January! ❤

Several years ago, the thought of having another baby after all we’d been through with Braxton was simply out of the question. I was scared and nervous to even entertain the thought. As friends of ours who also have children with special needs began expecting a child, I started to think more about the possibility. I asked them questions about how they felt, if they were doing more in-depth genetic testing from the very beginning this time, and ultimately admired from afar. At that point in time, I had decided that *if* we did get pregnant again, that I wasn’t going to be blindsided this time. I was going to ask for more testing up front so we would know what to expect this time.  Going through an uneventful pregnancy and being told something is wrong with your baby moments after birth and then waiting nearly 2 years for answers is an experience I never wanted to go through again.

But, this summer, it happened. I found out I was pregnant. We had been talking about having another baby for quite some time and finally our prayer was answered.  At my first appointment, I was 8 weeks along, and the doctor explained she wanted to go through everything as if it were my first pregnancy to be sure she didn’t forget something or assume I knew something I didn’t.  She began explaining our options for the standard “First Trimester Screen.” She told us about the standard testing they have been doing for years and explained the test and it’s efficacy in determining if a child will be born with Down Syndrome. She went on to explain that there is a new test that can predict with approximately 96% accuracy and will also tell you the baby’s gender by 12 weeks. And there is another test that can check for a variety of other conditions as well. I looked over to my husband, and knew we were on the same page.

When we spoke after the appointment, my husband asked if I wanted to do the in-depth testing, and surprisingly, I said no. He then told me he felt the same way. We decided that knowing wouldn’t change anything. We’ve already been on the journey, we’ve already got the resources and the support. If, by chance, we found ourselves on the journey again, we wouldn’t be blindsided this time. This time, we were ready. And finding out wouldn’t change whether or not we would keep the baby or make us love her any less. I realized that we were in a very different place than we were several years ago, when we thought we’d ask for every test under the sun. I knew that with my husband the systems we had in place, there was nothing we couldn’t face.

However, it wasn’t until several weeks later that I realized that not everyone was on the same page. Disability affects the whole family. I know this. Disability is a part of many conversations in our household and my daughter is very attuned to the issues we face with Braxton and more recently, with her as well. She was diagnosed with ADHD in December of 2014, and while some people may not see that as a “special need” or a “disability,” there have been some aspects of the condition that have been truly debilitating for her and we have been working hard to get her the support she needs medically and in school. She is very aware of the difficulties she’s faced and often feels like an outsider, despite our best efforts to build her up and make sure she is included.

Some time after I told her she was going to be a big sister again, she came up to me while I was cooking and said, “Mom, do you think the baby is going to be born like Braxton or like me?”  At first I thought she was asking if the baby was a boy or a girl, or maybe if the baby would have her tanned skin or Braxton’s light skin. “What do you mean?” I asked. “Do you think the baby will have a disability like Braxton? Or do you think she will have ADHD like me?”  I was completely caught off guard and said something like “Oh, don’t you worry about that. Baby is going to be just fine.” She seemed content with that answer and scampered off to watch TV.

She’s asked me some variation of this question at least 4 more times and every time, I am without the right words to say. Last night, again “Mom, Do you hope this baby is normal when she’s born?” Again, I am less than eloquent. “Baby girl, we are all born with our own special gifts, talents, and difficulties. We don’t know what to expect when the baby is born, but I promise she’s going to be okay.”

I have struggled with the disability conversation with my daughter from the beginning. How do I tell her about her brother? How do I make sure she doesn’t feel left out? What do I do when she thinks all the attention is on him and not her? We have had some struggles but for the most part I seemed to have found the right words and she has been such a huge advocate for herself and for her brother. But, now, I am at a loss again. Do I reassure her that the baby will be fine? Or will that make her feel inferior because the baby is “normal” and she’s got a diagnosis?  I have tried to tell her that there is no such thing as “normal,” that we are all born with our own special quirks and that’s what makes us all so unique.

For now, she is appeased. She is excited to meet her sister. She kisses my belly every night and talks to her sister often. Hopefully I can find the right words to put my sweet girl at ease the next time she asks. Hopefully I can help her find her way to a place of acceptance and help her move past whatever mountain seems to be standing in her way. 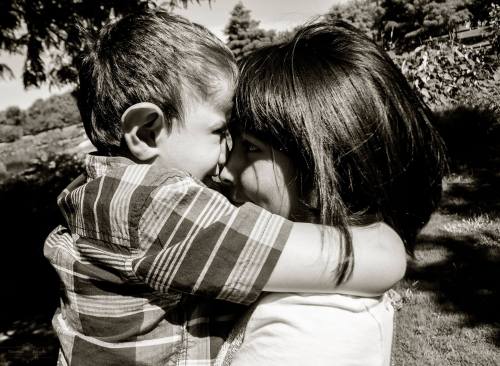