Braxton had a follow-up Swallow Study today and we got some unexpected news.

A few weeks ago we followed up with our Sleep Doctor/ Pulmonologist and I mentioned to the PA that Braxton had recently started making a strange noise while he was eating, like he was clearing his throat and then swallowing his food. I didn’t think much of it until we were at the appointment and something told me I should tell the doctor about it, considering Braxton’s history of aspiration (swallowing liquid into his lungs). The PA was concerned enough to talk to our main pulmonologist who decided we should order a new swallow study. She also listened to his lungs to make sure they were clear, and they were.

Here is a video of what we were seeing:

We didn’t make any feeding changes and I made sure to talk to our Speech and Occupational Therapists, we were all stumped. Our Speech Therapist thought it could have something to do with all the ear trouble we have been having this summer since the ear and throat are all connected. It would certainly make sense if swallowing was hurting his ears and he was trying to relieve the pressure or whatever it is he was feeling. He still seemed to be swallowing normally and wasn’t showing any signs of aspiration, so we continued with our current feeding regimen. 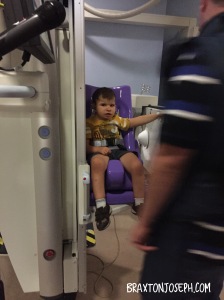 Today we finally had the swallow study. I went in not expecting much of anything, but we may have a new issue to worry about.

During the test the speech therapist and the tech kept saying they saw Braxton regurgitating the food which is part of the reason we are seeing multiple swallows and the throat clearing. There were also a couple instances where it appeared he *might* be aspirating again. He was surprisingly calm and cooperative the entire time, so aside from the Barium not being so tasty, he did exactly what we would see at home. Once completed, we sat in the waiting room while the speech therapist and tech reviewed the recording to discuss their findings and recommendations with us. It took much longer than it has in the past.

The speech therapist finally came out and let us know that while she is not able to give us an official diagnosis, what she was seeing appeared to be an esophageal dysfunction. When you eat, your esophageal sphincter opens to allow the food to pass and then it closes so that air does not enter. Braxton’s upper esophageal sphincter is sometimes opening properly and other times it is opening and closing before his food gets to the esophagus. And there are times that the esophagus regurgitates the food which gives him trouble with swallowing. She also noted that even when everything works properly he is taking two or more swallows per bite.

So, now we need to figure out what exactly is going on with his esophagus. We’re looking at some kind of structural anomaly that we haven’t seen before. The speech therapist said she’s never seen what she saw today with Braxton. She also called in another radiologist who also said she’d never seen this. (Of course! Braxton has always been quite the medical mystery).  The plan for now is continue with oral feeds, but she was insistent that we proceed with caution since we don’t know what is really happening. We will need to cut back on his food and give him smaller bites since he did seem to tolerate that better than the larger bites. She will also be making a recommendation for us to get back in to the Aerodigestive Clinic so that our ENT, GI, Pulmonologist and a Speech Therapist will all be able to see him at the same time so we can all discuss what’s going on and formulate a plan.

I’m really not sure where we go from here, but obviously, this was not the news we were expecting. This could explain why we have had some difficulty getting Braxton to move up to thicker foods and different textures. Cutting back on feeds will certainly be a setback we didn’t expect. But, like all things, I know we will make it through.  I hope we can get some answers and clarity very soon. And to think I almost didn’t even bring it up to the doctor!

I am doing my best to stay away from Dr. Google today and patiently waiting for a follow-up with our doctors. Braxton and I enjoyed some time outside this afternoon on his new swingset. His sweet smiles and laughter filled my heart, and for a moment all was right in the world. 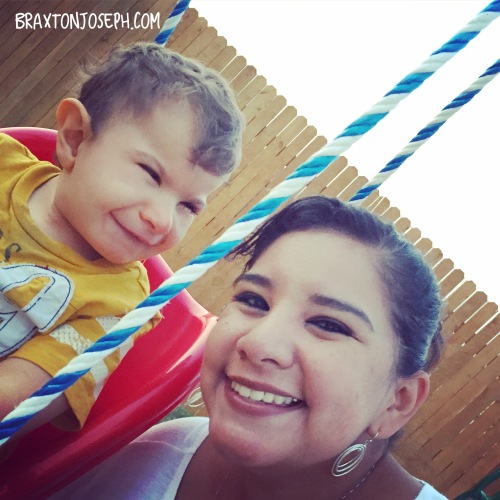 One response to “An Unexpected Setback”