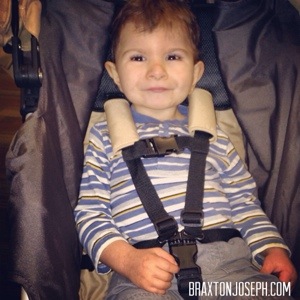 Well, here we are again sitting at Dell Children’s Hospital. Braxton checked in at 6 am for his Tonsillectomy and Partial Adenoidectomy.

Everything has gone pretty smoothly this morning.

It’s too bad we didn’t see this anesthesiologist sooner! He read off Braxton’s list of symptoms and halfway through he stopped, looked up at him and said “Is he a Rub-” and I said “Yup, Rubinstein-Taybi” thinking he would mis-pronounce it. The doctor went on to say that was going to be his guess based on the list of symptoms. He seemed surprised when I said we didn’t have an official diagnosis until Brax was 21 months. Crazy that now we have a diagnosis, we are running in to doctors left and right who are familiar with RTS! Where were they at the beginning of this journey?!

After speaking to the nurses, the anesthesiologist, and the ENT we had a little time for smiles and snuggles.

Braxton just went back with the anesthesia nurse. Our ENT said the whole procedure should only take about 45 minutes to an hour. I will update this post with info and also share on our Facebook page.

Thank you all so much for your continued prayers and support.

///UPDATE 8:07 am: ENT just came in and said he’s all done! Braxton did really well. Doc said he removed the tonsils and about 80% of his adenoids. He also replaced Braxton’s ear tubes. They are moving Brax to a recovery room and waking him up. We should get to see him soon.

///UPDATE 9:37am: Dad had to leave for work so I waited until the nurse came and said it was ok to see Braxton. He was still asleep in the recovery room when I arrived. I have him some hugs and kisses trying to wake him but he wouldn’t really open his eyes. He was much slower to wake than he has been in previous surgeries. But, he did finally wake and the nurse said his Oxygen level was still dipping down to the 80s so we had to wait for him to maintain a good level before going up to our room.

About 15 minutes later Braxton was keeping his eyes open and his Oxygen level was 95-100 so the nurse let us come up to the room. Another vital check and we are getting settled. Brax is still pretty out of it, with a semi-glazed over look. Not many smiles out of him just yet, but his vital signs are good and I’m sure he will be just fine. I will keep you posted!