A Rocky Start to Recovery

Today has been rough.

Our ENT did warn me that the recovery for this surgery is not easy, and I certainly underestimated exactly how tough it would be.

Compared to the other times we have been here, the surgery part was a walk in the park. Brax was in and out in under an hour! The past surgeries and procedures required Braxton to be under for up to 4 hours.  In the past, we can usually wake him up in the recovery room pretty easily, and he goes right home and is pretty much back to himself.  That was not the case today. 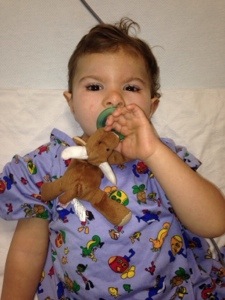 We finally got up to our room at about 9:30 this morning and Braxton was awake, but pretty drowsy and lethargic.  The nurses did all the intake vitals and started his IV and medications.  By 10 am, he was asleep again.  Around noon, the nurse came in and said it was ok for me to start giving him clear liquids and if he did well, we could move forward with his blended diet.  She also said I should try to wake him up and see if he would take anything by mouth.

I was able to sit Braxton up, but he would not hold himself.  He just sort of flopped over and the oxygen/heart monitor started going crazy thinking he wasn’t breathing.  I tried to drip some water on his lips because they were already so chapped.  Braxton refused.  The nurse said to try some applesauce and I tried teeny tiny bites and Braxton refused to swallow.  He just held it in his mouth and tried so hard to spit it out.  I stopped trying and told the nurse I would just keep him hydrated with his g-tube.  I also asked for a wet washcloth to at least wet his lips with occasionally.  She was okay with that plan. (Duh, right?)

I ordered Braxton some Apple juice and Chicken broth from the cafeteria and he held that down pretty well.  But, he still would not wake up.  I tried to sit him up and every time he just flopped back over.  I have never seen him so groggy.  Around 3 pm I sat him up again and his chest and back were on fire! His blanket was only covering him from the waist down and all of his limbs were normal temperature.  I called the nurse in and she took his temp.  It was 102 degrees.  She called our ENT to let him know that Braxton had spiked a fever and was excessively sleepy.  Our ENT was not too concerned about the sleepiness part and said just to treat the fever for now.  I finally gave Braxton his homemade blend and although he wasn’t awake, he kept it down.

I just sat here watching Braxton sleep and could see he was in so much pain.  He was snoring very loudly and every few minutes he’d whine and go back to sleep.  So heart breaking to see him hurt and not be able to do anything about it.  The nurses kept him on Tylenol and Ibuprofen.  The doctor said since he was so sleepy that it would not be a good idea to give him the narcotic which would only make Brax more sleepy.  😦 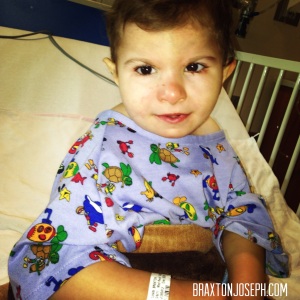 Finally, just before 6pm, Braxton woke up.  Really woke up.  He had some life back in him and he started swinging his pacifier around and grabbing the cord from the pulse ox monitor swinging it back and forth.  I did happen to try to let him have some sips of water and he took 2-3 sips from his Honey Bear Straw Cup.  Then, I tried a few bites of applesauce and surprisingly he ate about half an ounce.  I could tell it hurt him to swallow, so I didn’t force him.  I just wanted something to coat his poor throat.

He stayed up after that and we played and snuggled.  I pulled out his trusty iPad and he played some of his favorite games.  It’s 8:30 now and he’s back asleep.  I was really starting to get concerned with him sleeping so much earlier, but after seeing signs of what is normal for Braxton, I think it’s ok for him to rest again.  Well, as best as he can with the nurses coming in every so often to check vitals and give meds.  I just noticed that he doesn’t seem to be snoring as much as he was earlier and the congestion has gone down a little so his breathing isn’t rattling.  Thank. Goodness.

One thing is for certain, I have my work cut out for me this week helping him recover and stay comfortable.  Dad had to leave for work early this morning so I’m going it alone this round.  Please continue to keep Braxton in your prayers.  I know this recovery is going to take it’s toll on my poor baby.  But, I know he is going to be SO much better when this passes.  And so will I! To finally be able to sleep and not worry about my kid not breathing in the middle of the night will be such a relief.

Your thoughts and prayers are so appreciated.

3 responses to “A Rocky Start to Recovery”