Sometimes Boring is a Good Thing

The past couple of months have been pretty quiet for us.  I’ve gotten so used to the marathon of doctor appointments, therapies, and frustrating news that I really am not sure how to handle any sense of “normal” and otherwise “boring” that we have had as of late.  It’s just been a little strange not sitting in waiting room after waiting room as we have for most of Braxton’s short life so far.

At the last Dr Visit earlier this month.

In his first year, we were at the pediatrician’s office just about every other week and had appointments with specialists at least 4-5 times per month.  It seemed like I was dealing with devastating and equally frustrating news and test results on a never-ending basis. Each time we accepted the news previously received, something new came up to rock our world.  The first year and a half was genuinely rough on us physically, emotionally, and spiritually.  At about 18 months, something clicked for Braxton and he has been knocking down milestones left and right.

Each month that passes further from the day we received our diagnosis has seemingly gotten easier and easier.  I don’t know why I’ve been so reluctant to accept that things are finally okay.  I guess it’s because I know that at any given moment it could all turn right back upside down.  Sometimes, it’s hard to take a step back and look at the big picture when you’ve spent so long living in moments, careful not to plan too far ahead for fear of never seeing those plans come to fruition.

Every day Braxton wakes up is a blessing.  Every day that any of us wakes up is a blessing.  We wake up and Braxton is standing in his crib, sometimes jumping, sometimes babbling, but always, the moment he makes eye contact with one of us, his face lights up and he has the biggest smile on his little face.  That smile can melt away the greatest struggle.  And no matter how tired I am, that smile makes all of it worthwhile.

Braxton has been doing incredible at his new daycare.  He is making progress every day and I truly believe that he is going to walk in no time.  He is standing so much more at home and in school, his teachers say that he spends more time up off the ground than he does sitting or crawling.  For now, crawling is faster, so he might crawl over to where he wants to be, but the moment he gets there he is right back on his feet, cruising back and forth.  His physical therapist has reported that he will stand Braxton with his back to a shelf so he knows he is still supported, and Braxton has tried to take a step forward on several occasions.  He can stand for very short periods of time without support, but as expected, as soon as he realizes no one is holding him he frantically reaches out for support and tries to get down.  This is absolutely developmentally appropriate and so exciting to see! 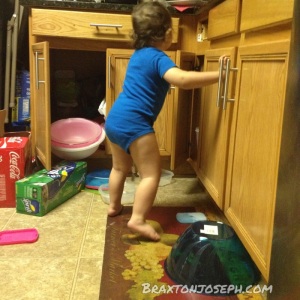 Brax is even showing signs of completely typical toddlerhood.  His favorite thing to do at home is open and shut the cabinets, and then he will open it and take everything out.  I am constantly finding random tupperware strewn across the kitchen.  Just yesterday, he was carrying a frying pan around the kitchen.  Poor kid has no toys but tupperware and frying pans! 😉 Sure would have saved us some money had we known that’s all he needed to keep him entertained! And just last week in daycare, I watched Braxton crawl right over to another child who was laying down and playing with a toy on his tummy.  Brax crawled with intent, grabbed at the toy and tried to tug it away from the other little boy.  The boy stood his ground and tugged back.  Braxton whined for a second and then decided if the boy wouldn’t give up the toy he’d just play with it anyway right on the kid’s tummy, too! The only thing missing was either boy shouting “Mine!” at each other.  I picked Braxton up and redirected him to another toy instead of using his poor friend as a play table. It’s really nice to have some typical experiences thrown in to these completely atypical life that we have.

Medically, things have been stable and pretty “boring.” But in this case, that is a very good thing! I’m so thankful not having to spend time in the hospital or in doctor’s offices for a change.  I finally have time to sit back and just enjoy my kid being a kid.  I play with him and watch him learn new things as I let him explore on his own.  I’ve always loved watching kids figure things out on their own.  You can see the wheels turning in their mind and the sheer pride in their face when they finally figure it out.  I can finally see that in Braxton and am learning to appreciate NOT being on the go all the time.  Trust me, I have plenty to keep me busy, but it’s so much better than worrying about yet another doctor’s visit or the agony of waiting for test results.  Braxton has been doing a really good job of keeping me on my toes as well.  Can’t leave the kid alone for 5 minutes and expect everything to be in it’s place when you return.  I can honestly say that I absolutely love it!

Boring means I get to enjoy moments like this. Braxton laughing at bath time. My heart is full.

One response to “Sometimes Boring is a Good Thing”