My Biggest Fear And How YOU Can Help 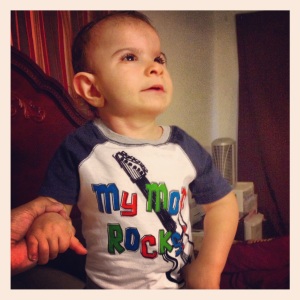 Sure, at first glance, Braxton doesn’t appear to have any medical issues.  In fact, most only see the handsome, smiling baby staring back at them, but things are not always what they appear to be.  That brings me to my first issue: What does “disability” look like? Does a person need to appear physically deformed before you consider them disabled? Before you knew Braxton, did you know “disabled” people could look…”NORMAL”? There is no standard of what people HAVE to look like in order to be classified as disabled, nor should it matter what they look like to deserve respect! That brings me to my next issue: RESPECT.  One of the ultimate forms of disrespect is name-calling and using words like “retard.” Mentally Retarded was once an official medical diagnosis used to describe many individuals who were “slowed or delayed in cognitive ability” (the official definition of “retard”).  Wait a minute…what do you mean “was once an official diagnosis” ? Yup, ONCE.  “Mentally Retarded” is NO longer recognized as an official diagnosis. The term has been stricken from legislation, healthcare policies, and diagnostic terms partially due to the extremely negative connotation the word now has.  Over the years, society has taken a medical term and the individuals it was ascribed to and transformed the word in such a way that not only is it mean and hurtful, it completely demeans the worth of millions of individuals.

Finally, this brings me to one of my biggest fears.  Eventually, Braxton has to go to school.  I am terrified of that day.  I’m not afraid of him being in school, but I am afraid of the other kids he will be in school with.  We are still so unsure of what the future holds for Braxton with whatever diagnosis he may have, but I’m certain he will have cognitive delays.  At 20 months, Braxton is actually more like a 10-11 month old baby developmentally.  It is possible that he “catches up” and maybe even has “normal” cognitive ability, but no one can tell me that with any certainty.  Who knows if his diagnosis may also bring physical deformities later in life – there is so much we don’t know right now, and most days I silence those thoughts and thank God for the blessings of today.  I’m so thankful that Braxton is doing as well as he is, but I know he’s still not where he should be.  I’m so scared of Braxton going to

Teach your children to be respectful

school and being bullied.  I know it’s going to happen and there is nothing I can do about it.  And THAT is what terrifies me – the nothing I can do about it part.  I’m deeply saddened that as a parent I cannot help shield my son from the cruelty and hate in this world, that all I can do is help prepare him to face it, and hope he is able to actually defend himself when the time comes.  Braxton will be one who the term “Mentally Retarded” describes.  Actually, the official term is now “Intellectual Disability” and I know this is something we will have to deal with.  Braxton is more than likely always going to be behind his peers.  I don’t even know if Braxton will ever even speak correctly.  He makes many sounds, but none are real words with meanings.  He may need an assistive communication device to talk to us.  Hopefully he will learn sign language to communicate with us too.  He’s always going to be different.  We will do our best at home to teach him to embrace his differences and not be embarrassed by them.  We will teach his sister how to stand up for him.  She already loves him despite any disability, and I’m so thankful she will also grow up and be more tolerant of others because she has grown up in such an environment.  But hate, cruelty, bullying, ignorance, and a slew of other things no child should EVER have to deal with we will HAVE to prepare for, because it will inevitably happen.

I will admit (although I’m ashamed to) that yes, I once threw around the word “retard” like it was nothing.  I felt like if I wasn’t using it toward an individual with an intellectual disability in a mean way that it was no big deal.  I was wrong. Very wrong. It’s a HUGE deal. Sadly, it took having my own child with disability to get me to understand this.  And that’s where YOU come in.  I need YOU to help me bring this issue to light. To understand it’s importance in our life and how it directly affects us.  I can’t change the future, I can’t stop the hate my son will face, but I CAN attempt to educate everyone I meet and everyone who reads

our story about the terrible effects of the “r-word.” The word is usually used in a derogatory manner to mean any number of things including: stupid, pathetic, loser, moron, idiot – none of which is how I would want my son to be described.  This is so much more than a language change; it’s a culture change.   We as a culture have to change the way we think about people with disabilities and words like “retard” and ultimately strike that word from our vocabulary altogether.  You may not realize that your choice of words is harmful to people, but I’m here to tell you that it is.  The r-word hurts million of people and kids like Braxton.  If you wouldn’t want someone picking on Braxton, you shouldn’t stand for anyone slandering another child similar to Braxton.  When people are called out for using the r-word the standard response is something like “Oh, I didn’t mean YOUR kid” or “I didn’t mean it like THAT” or “well, you know what I meant” No, actually I don’t know what you meant.  From where I stand you meant to say that you did something stupid or foolish, or that someone else did something pathetic, or that someone is a loser.  Why not say that? Why not choose another word? Why not strike the insult altogether? The Special Olympics started the “Spread the word to end the word” campaign several years ago to tell people how harmful the r-word is and to get people to think about what their words mean.  Today is the national campaign day to spread the word.  There is still time for you to go to r-word.org and add your name to the list to pledge to STOP the use of the word “retard.” Little by little we can all make a difference for Braxton and all the children like him. 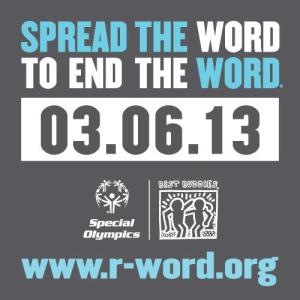 6 responses to “My Biggest Fear And How YOU Can Help”