Well, that took entirely too much time to set up! I should have started this months ago!! Well, you have an update and everything that’s been going on and where we stand with all the doctors.  Just a little more about the past month or so…

Most recently, Braxton was in the hospital for pneumonia and croup. 4 day hospital stay…not fun! He’s been a pretty noisy breather since birth and seems to ALWAYS be congested and has a never-ending cough.  Well, I started noticing the cough getting worse and then he started running a fever.  Then, he just didn’t seem like himself at all. Just lethargic and cranky.  Took him in to the pediatrician and she did a CBC and his white blood count was elevated which showed the likelihood of something bacterial instead of just a virus, so she gave Brax a shot of Rocephin (a pretty powerful antibiotic) and told us to follow-up in the morning.  She said it was pneumonia and sent us for a chest x-ray to be sure.  We hadn’t even left the parking lot and the Imaging place had already called the doc to confirm.

We went in the next morning and Brax didn’t seem any better.  So she gave him another Rocephin shot and sent us home with a script for an oral antibiotic to start the next day.  Later that day, I just didn’t feel like the shots had done him any good.  He was still just very sleepy and not wanting to eat or anything, so I called to see if I should be worried.  I mean, I know this is pneumonia and no shot is going to make him be ok within hours, but I thought I should at least have seen SOME improvement and I hadn’t.  Sure enough, doc agreed and said to take him up to Dell Children’s ER and see if he needed to be admitted.  He was admitted, mostly because I told them he was having problems keeping feeds down and they didn’t want him dehydrated so wanted to keep him overnight.  Well, overnight turned into 4 days.  His fever spiked up to 103.8 a couple times and he had several breathing treatments and oral steroids.  Finally, his fever broke and he started coughing less and even kept his food down.  They let us go home.  He’s been ok since then at home.  Just about back to his normal smiling self.  He still just doesn’t really seem to want to eat though.  In fact, I think his stomach shrunk since he hadn’t been eating well the past few weeks.  We’ve had to step back down on his feeds to work him back up to his full feeds. Ugh..it’s never ending I tell you!

Hospital Pics…. even in a purple hospital gown, he’s gotta be the most adorable baby ever! 🙂 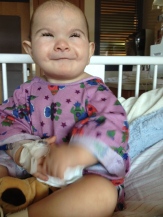 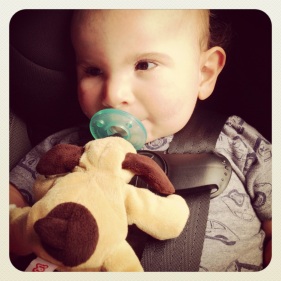 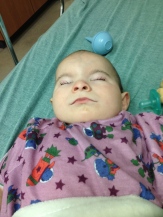